A service technician pulls into a busy Wawa® gas station on a hot summer day in 2016. He’s there to address a report of slow flow on the diesel dispensers. Not unlike any other stop on his route, he puts on his PPE, sets up his safety barricades around the dispensers, and opens the dispenser cabinet to begin his inspection of the filter. Upon pulling the filter, he is met with the bright orange hue of corrosion and debris. He’s made this same filter change the month before, and the month before that. It has become an all too common task these days.

If you operate a service station that dispenses diesel fuel, odds are that your business has experienced some type of disruption caused by corrosion within the fuel system over the past several years. From higher maintenance costs, to testing issues, degrading fuel quality, and even component failures, diesel fuel systems are being disrupted across the industry.

"Internal system corrosion is the one pain point that keeps me up at night."

Paul Beu is the Senior Petroleum Systems Technical Advisor at Wawa, one of the largest marketers in the United States. He has a unique perspective when it comes to corrosion, as he is responsible for a network of Wawa sites that spans across the Mid-Atlantic region of the United States including New Jersey, Pennsylvania, Delaware, Maryland, Virginia, and extends to Florida as well. The wide range of environments, climates, and temperature changes give him a complete picture of how corrosion can affect the operation of a fuel system. “Internal system corrosion is the one pain point that keeps me up at night,” said Beu. “If it goes beyond the surface level of your sumps and gets into your tanks and fuel, it can cause some serious issues in your system. It’s not enough to be reactive with it, you need to be proactive in continuously targeting and eliminating the source of the corrosion from your fuel system.”

After exploring biocide treatments, tank cleanings, submersible pumps with advanced protective coatings and humidity controlling desiccant packs, Beu decided he had to go further. These reactive solutions would only keep the corrosion at bay for a short period of time. To attack corrosion head on, Beu leaned on Franklin Fueling Systems to develop a solution that would stop it in its tracks before it had a chance to develop. 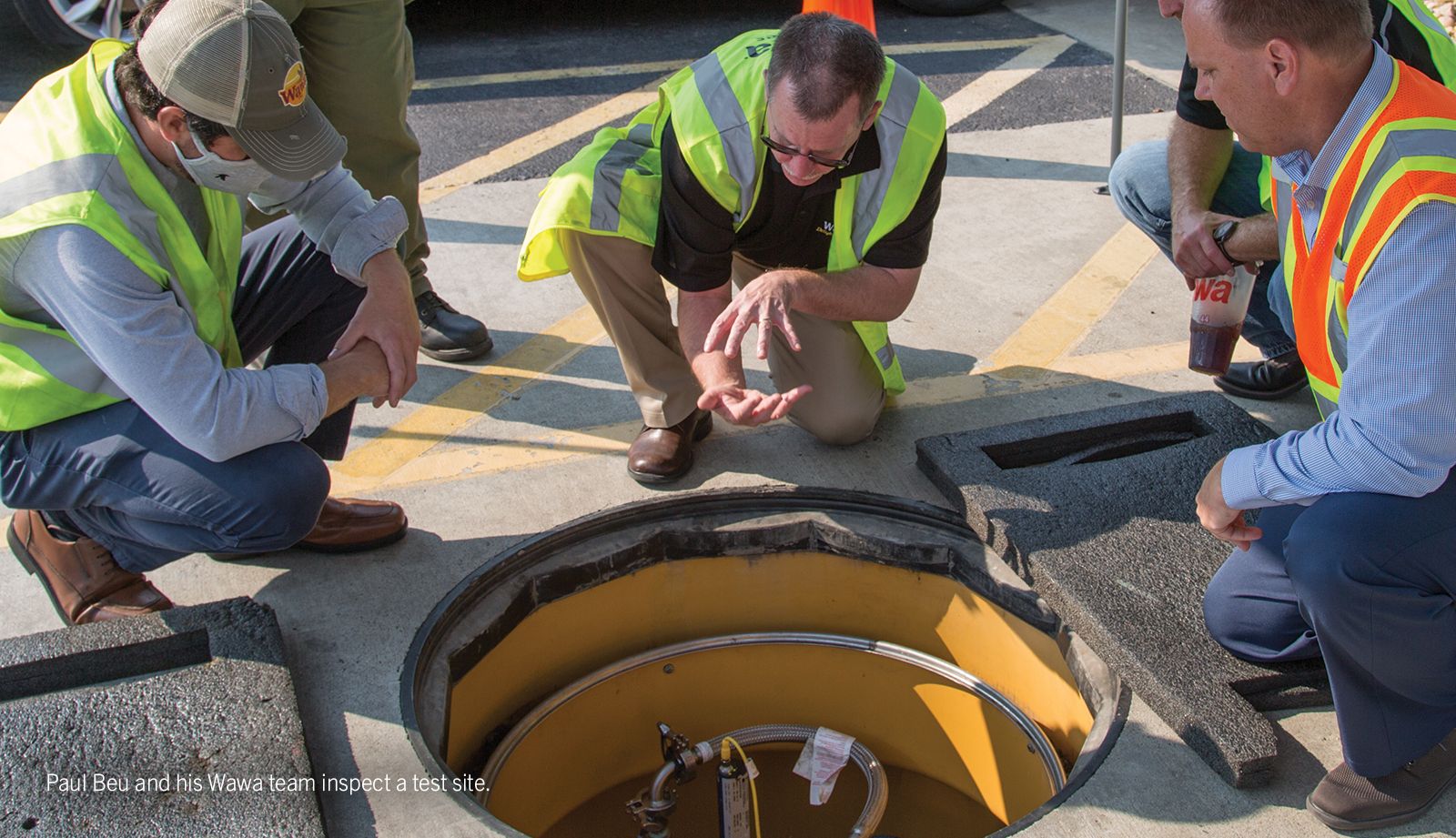 To go forward, we first need to look back. How did corrosion become such a pervasive issue in diesel tanks? As far back as 2006, the use of cleaner-burning Ultra Low Sulfur Diesel (ULSD) and the increased use of biodiesel levels in fuels was beginning to impact fuel systems with accelerated corrosion. By 2012, an independent study conducted by the Battelle Memorial Institute on behalf of the Clean Diesel Fuel Alliance had determined that severe and rapid corrosion was being seen nationwide in underground storage tanks (USTs) storing ULSD.1 “Corrosion is coating the majority of metallic equipment in both the wetted and unwetted portion of ULSD USTs,” stated the report.

The report hypothesized that the ULSD was creating an atmosphere for greater microbial activity. These microbes were producing acetic acid  by-products that were establishing a corrosive environment in the ULSD systems. It was also noted in numerous studies that just a few gallons of water at the bottom of a tank would ultimately lead to corrosion. Current industry methods of tank gauging couldn’t detect such a low amount of water at the bottom of a tank. With this knowledge and in partnership with Wawa, Franklin began experimenting with removing the water from the bottom of the tank which was thought to be feeding the microbes, leading to accelerated corrosion. The results were clear.

Franklin Fueling Systems installed the first Corrosion Control™ Water Separator System at one of the worst corrosion-affected Wawa sites. After just 90 days of proactively removing the water from the bottom of the tank, the new system was yielding clean, clear diesel fuel and the submersible pump components were free of corrosion and easy to inspect and test. Because water is heavier than diesel fuel, it will fall to the bottom of the tank. Using this same principle, Franklin separates the water from the fuel inside the Water Separator’s collection vessel to trap the water and return clean fuel to the tank.

“This picture tells the story better than anything written – these bottom samples come from a store that has two diesel tanks, one with, and one without a water separator,” said Beu. 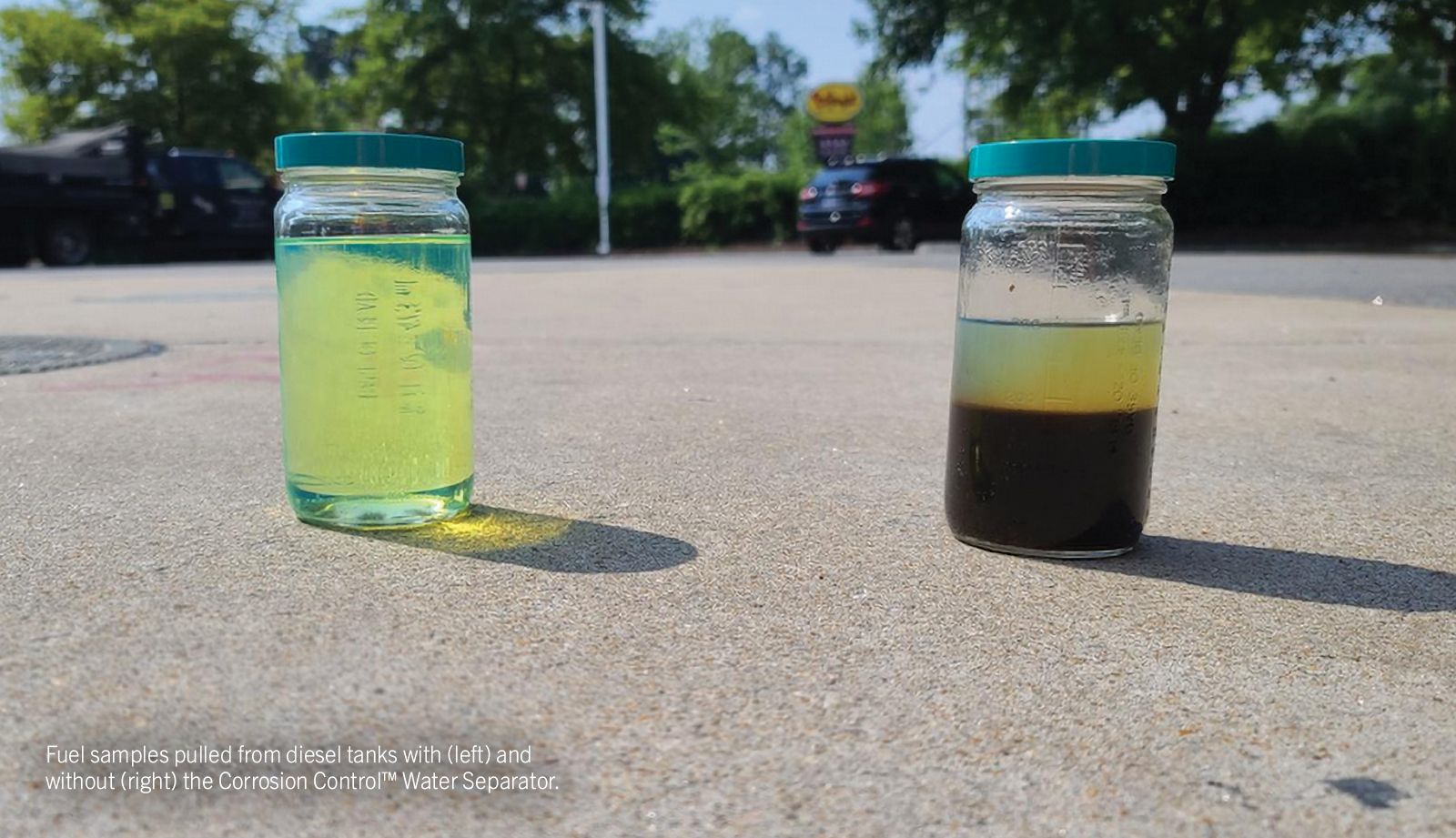 “This picture tells the story better than anything written – these bottom samples come from a store that has two diesel tanks, one with, and one without a water separator.”

The story doesn’t end there though. The solution for Wawa went beyond the Water Separator itself. Beu needed a means to automate and control the water separator at his remote network of sites stretching along the East coast. Beu needed a way to let his team know the water level in the vessel so that they can determine when to remove the water that was collected. He wanted to know if corrosion was creeping back into the system. That’s when Franklin leveraged the power of its EVO™ 600 Automatic Tank Gauge (ATG) to take over automation and detection.

Water can enter the system during a fuel drop or from ground/surface water intrusion. A special new application for the EVO™ 600 ATG was developed to streamline system operation and remove water. It automates the water separator to run for 45 minutes after each fuel delivery in order to remove any water included in the fuel drop. It also runs once more per day during non-peak times to remove any additional water that drops to the bottom of the tank over time.

New Corrosion Control™ Corrosion Detection Sensors were installed in the tank ullage as a safeguard to proactively monitor for conditions that may lead to corrosion so Wawa’s maintenance personnel could react before it became an issue. As these were retrofit applications to existing sites and with all these new devices being installed inside existing tank sumps, there was one more hurdle to overcome. How could Wawa provide communication wiring to all this new technology without the massive expense and costly site shut down time to break concrete and run additional cables to all of their tank sumps? 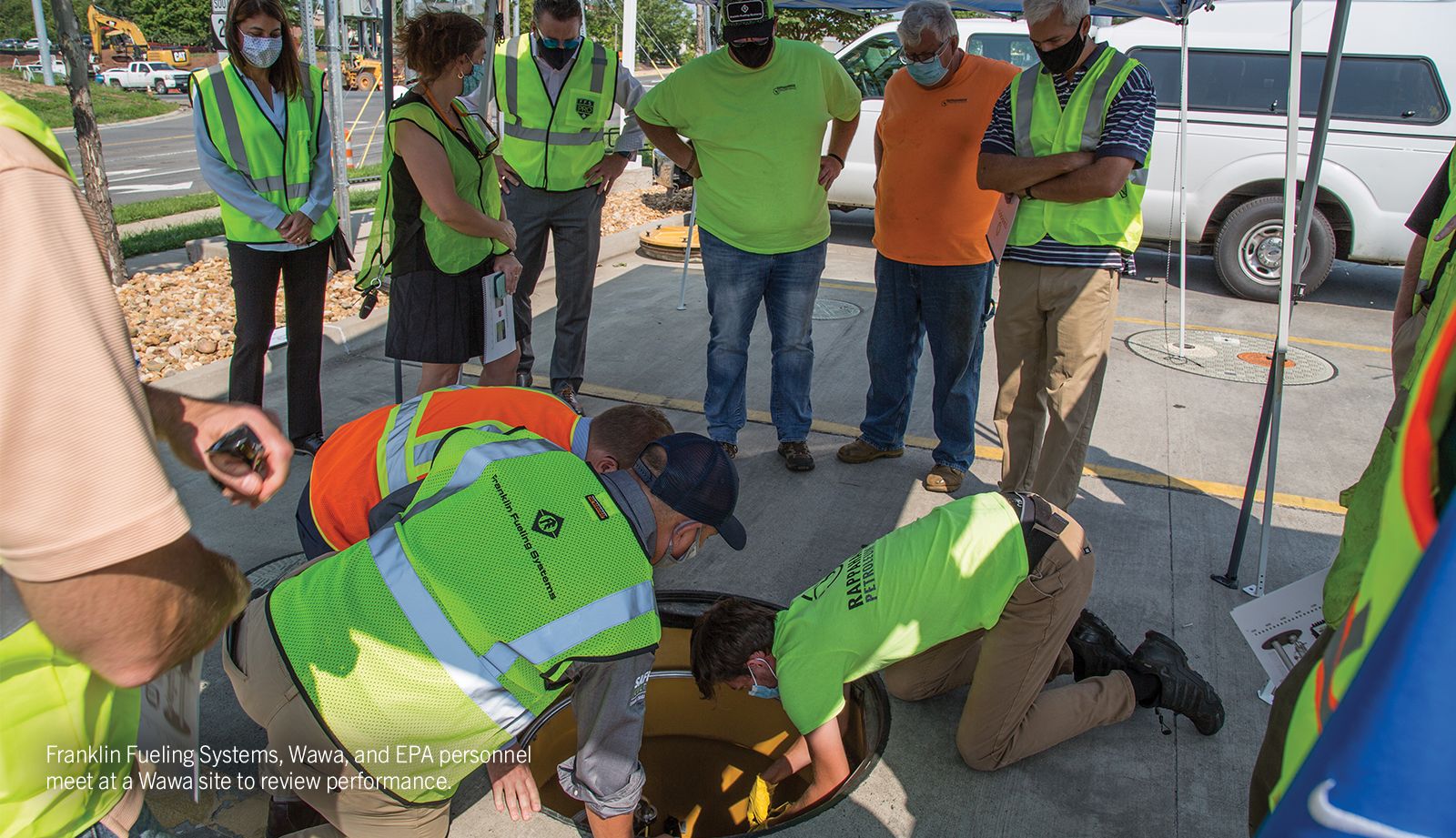 To solve this last obstacle and complete the fully integrated Corrosion Control System, Franklin developed the Multiplexing Sensor Hub. The Multiplexing Sensor Hub allowed Wawa to use a single, existing 4-wire cable to connect up to six devices to an EVO™ Series ATG. The sensor wires already present inside the tank sumps could now provide power and communication to all of these new devices without the need for new wiring.

"That is the definition of walking the talk.”

By pushing beyond the surface issues of corrosion and taking on the root cause, the Franklin Fueling Systems and Wawa collaboration team arrived at a preventative solution.

Looking back on the project, Beu says “One of Wawa’s core values is ‘do the right thing’. Given all the upheaval in our industry due to the pandemic, it would be easy to pull back on our microbial induced corrosion control efforts, but that is not the Wawa way. Wawa is adding Water Separators to 45 more stores before the end of this year. That is the definition of walking the talk.”